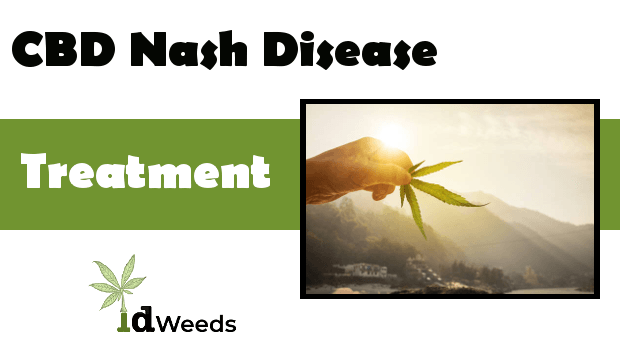 Nash disease (Non-Alcoholic SteatoHepatitis) is a progressive form of Non-Alcoholic Fatty Liver Disease (NAFLD), affecting one in three Americans. It is rapidly overtaking Hepatitis C as the cause of liver cancer. CBD for Nash Disease again seems to be the solution.

According to the National Institute of Health (NIH), between 30% and 40% of adults in the US have NAFLD and about 3% -12% of these people have NASH.

NAFLD patients have a fatty liver- a diagnosis that you get when more than 10% of your liver is composed of fat. NASH patients also suffer from inflammation and liver cell damage. The only remedy that Medical Doctors currently can offer is to lose weight.

People at risk of NASH disease

Weight loss, eating habits, and nutrition, to a certain extent, can reduce inflammation and fat in the liver. However, currently, there are no ‘big pharma’ medicines approved to treat either NAFLD or NASH.

NAFLD patients often remain stable and free of complications. NASH patients can develop complications like cirrhosis and liver cancer, which, in turn, can lead to liver failure.

NASH patients have an increased chance of dying from liver-related causes and might be interested in the question: “Does cannabis kill cancer cells?”.

Cannabidiol and the Liver

Research shows that cannabis cannot only alleviate pain and inflammation of the liver, it can also treat the root cause of the condition. Besides that, it also:

NAFLD is the most prevalent liver disease worldwide, according to a research report released April 2017 by University of Massachusetts on Cannabis use and NAFLD.

A 2011 lab study on mice with a model of hepatic encephalopathy showed the following results:

A lab study carried out one month later concluded that CBD significantly reduced the extent of liver inflammation, oxidative/nitrative stress, cell death as well as having showed other protective effects. Yet another 2011 study reveals that cannabidiol causes the death of activated Hepatic Stellate Cells (HSCs) in liver fibrosis.

Similar results were achieved in a rat study later that year.

A large-scale 2013 study comprising both lab studies and clinical trials on several liver diseases and the endocannabinoid system states that there is overwhelming experimental and clinical data supporting a major role of EC’s in the pathogenesis of liver steatosis and other features of chronic liver disease.

The report, however, raises concerns about the psychiatric safety of the EC treatment method but indicates that the non-psychotropic cannabinoid CBD is promising for liver treatment.

A 2017 research study revealed interesting information on the role of cannabis and fatty liver disease. The researchers of the University of Massachusetts studied patient data from three thousand hospitals and six million patients.

2017 Research Results on the Role of Cannabis and NAFLD:

This general research study by the University of Massachusetts is very important for the cannabis movement. It clearly shows cannabis’ potential for liver disease treatment. Most research on new medication is financed by ‘big pharma’ involving patents and ‘Return on Investment’.

Maybe because you cannot patent a cannabis plant, we have not been able to find any laboratory or clinical studies on cannabis plant medicine.

The severity of the medical condition determines the dosage level. A full-spectrum CBD oil or a combination of CBD and THC oil is recommended.

For mild conditions; take 40-50 mg of CBD a day, split into two or three dosages. To achieve the best effect with CBD for any disease, the cannabinoid needs to reach the affected area as close as possible. In case of NASH disease, we therefore want to bring it in contact with the liver.

This means that for this specific treatment, the best intake method of CBD oil and or Cannabis oil is oral. As opposed to sublingual, oral intake will pass the cannabidiol into your GI tract and through your liver.

NASH disease can turn into liver cancer, at which point it is no longer enough to only take CBD. Cannabis cancer treatment requires a combination of THC oil and Cannabis oil in large quantities. To get used to the THC high and avoid getting too high, you need to follow a ramp-up schedule as lined out in this article.

But, if your NASH disease has not developed into liver cancer, but still has taken a severe form, take 60-80 mg of cannabidiol a day in two or three takings. Multiple scientific studies show that it is impossible to overdose on CBD, so you can and should experiment with the dosage level to see what works best for you.