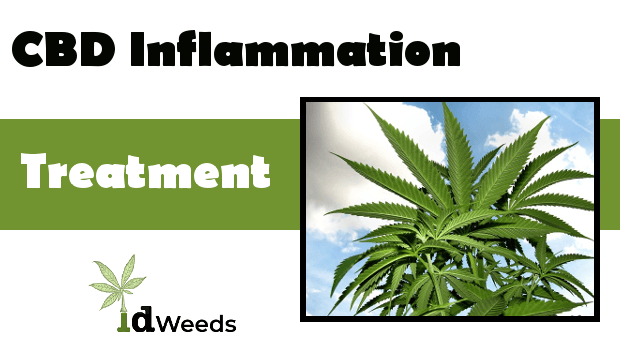 People have been using cannabis for inflammation for a long time. But, what is especially relevant is that its efficacy in this field is scientifically proven.

First of all, inflammation is an indication that the body is fighting harm and that it is in the process of healing itself. It is, therefore, a good thing, as long as it doesn’t become chronic.

“The Secret Killer: The Role of inflammation in Heart Disease, Cancer, Alzheimer’s and other Chronic Diseases”- 2004 Time Magazine cover-story.

So, add up the number of people suffering from heart disease, cancer, Alzheimer’s, and diabetes. Then, ignore the fact that people might have multiple conditions at the same time. And the result is: 50 million Americans (15%) suffer from a condition with chronic inflammation at the basis of it.

15% of the population deals with inflammation

Most noteworthy is that these numbers will dramatically rise during the next few years. The responsible governmental foundations predict dramatic increases in cancer, Alzheimer’s, especially diabetes.

Ironically, the cure for many of these conditions is the natural plant that has been around longer than humankind: Cannabis. Also, CBD and cancer treatment go well together and it is often used to mitigate pain and nausea caused by chemotherapy.

Wanting to know the best CBD dosage for Alzheimer’s? Read it in the relevant article. Scientific research proved that CBD and cannabis are extremely effective with most inflammatory conditions.

In 2007 a group of scientists studied the effects of cannabis on multiple sclerosis. What is especially relevant though is that at that time, the FDA had recently approved cannabidiol for the treatment of inflammation, pain and spasticity associated with multiple sclerosis.

Researchers carried out a lab study on a rat model with acute inflammation in 2004. As a result, they concluded that the Vanilloid TRPV1 receptor mediates the antihyperalgesic effect of CBD.  Yet another lab study in 2007 stated that CBD has proven potent anti-inflammatory and antioxidant effects.

A 2010 study on diabetic retinopathy studied the role of inflammation and potential CBD therapies for anti-inflammation treatment. In conclusion, they remarked that CBD caused certain activities like a self-defense system against inflammation and neurodegeneration.

Yet another 2011 study confirmed that Cannabidiol reduces Aβ-induced neuroinflammation. In addition, it showed that CBD promotes hippocampal neurogenesis through PPARγ involvement. The scientists concluded that these findings report the rather inescapable role of the PPARγ receptor in mediating CBD actions.

Cannabidiol, in a 2012 study, decreased inflammation in mice with acute lung injury. Another rodent test in 2012 concluded that cannabinoids suppress inflammatory and neuropathic pain by targeting α3 glycine receptors.

Mice with AP had positive anti-inflammatory effects due to CBD and O-1602. Also, cannabidiol improved the expression of GPR55 in the pancreatic tissue. A 2013 lab study also reconfirmed this.

In 2006, a clinical trial with 58 Arthritis patients was conducted. Thereof, 31 were treated with a synthetic analog of cannabis. Synthetic analogs are, as you know, 100% chemically produced in pharmaceutical factories- the very opposite of being taken from plants.

Other scientists proved before that synthetic cannabinoids are less effective than organic cannabinoids. Nevertheless, the results showed significant improvements in pain due to inflammation reduction in the joints.

In addition, in 2013, 21 Crohn’s disease patients that had failed to respond to the traditional steroid therapy participated in a clinical trial. Crohn’s disease is a chronic inflammatory condition of the GI tract. Finally, eleven patients were randomly selected for Crohn’s cannabis treatment, whilst the others received a placebo.

As a result, ten out of the eleven (91%) showed a clinical response with a rather significant reduction of their CDAI score (level of inflammation) of over 100. Furthermore, five out of eleven (45%) showed a complete remission after just a short eight-week treatment. Furthermore, they didn’t suffer from any side effects and reported improved appetite and sleep.

“As a result of CBD you have a global possibility of improvement in a number of inflammatory situations” – Dr. Philip Blair, MD.

Lisa de Rose from the Netherlands suffered from arthroses (Osteoarthritis) and rheumatism. But she didn’t want to take the regular medication that the doctors prescribed for her. Because she read the medical instructions, she understood the terrible side effects these meds would potentially cause.

At the age of 82, she therefore started taking cannabis oil and CBD oil to mitigate pain caused by the inflammation in her joints. She didn’t use a large dosage but was pain-free for the last six years of her life. (see video below with English subtitles, “The story of Lisa de Roos -Because we all die”)

15-year-old Coltyn Turner has another remarkable story. He treated his chronic inflammatory disease of the GI tract (Crohn’s) with cannabis oil and completely got rid of it.

Scientists proved in 2010 that THC and CBD acted synergistically to inhibit cell proliferation. This is just scientific proof of the effect of CBD because many of us already knew from our own anecdotal experiences: full-spectrum, whole plant, organic CBD oil is more effective.

Even small amounts of other cannabinoids and non-cannabinoid hemp components like terpenes boost each other’s effectiveness. This increases the overall CBD hemp benefits. The most important dosage determining factor is the severity of the condition.

Use our CBD oil dosage calculator to help you determine the number of drops that is the best fit for you.

Although it is not possible to overdose cannabidiol, it is unnecessary to take too much if it is not needed. In the case of inflammation, the severity spread might be even greater. Consequently, we recommend that, when you have a mild inflammation, start with a smaller dose of 20 to 30 mg per day. Monitor the effects and double it after four days if it didn’t improve or if the improvements were weaker then expected.

With severe inflammatory diseases like Crohn’s disease, you can start immediately with 50 mg per day. Monitor and double in four days if needed. We have seen Crohn’s patients take several hundred milligrams per day along with cannabis oil to boost the healing effect even more.

No matter how you take the CBD oil,  patients usually stay at the higher dosage for several weeks until the inflammation is improved. Then, you can go back to a maintenance dosage of anywhere in the range of 25 to 50 mg per day. Just find out by testing what the minimum dosage is for avoiding the inflammation to return.

Success Stories of  Patients with Inflammation