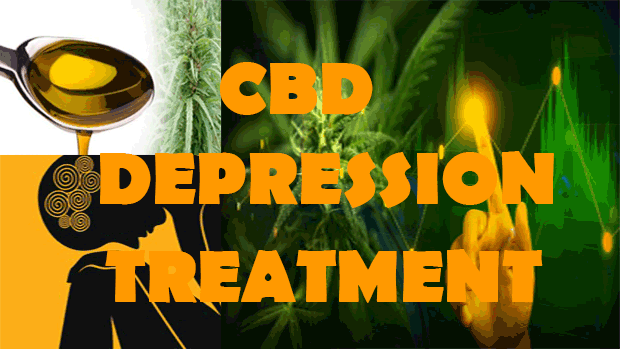 Even if you’re not directly affected by depression, there’s a decent chance someone you know is.

According to WHO – 350 million people suffer from depression worldwide and 16 million in US alone.

CBD Emerges as a Solution for Depression

For a long time, doctors prescribed conventional drugs. The problem was that scientists did preliminary tests for these drugs on animals. Once tested on humans – or worse – released into the market, these drugs caused catastrophic side effects.

Some even resulted in death. This is at least partially due to the pressure to release new drugs with minimal testing. On the other hand, CBD has been part of our medical arsenal (in the form of cannabis) for thousands of years.

As doctors sought to mask the symptoms and psychologists helped patients cope, sufferers took it upon themselves to seek other help. It started with small clusters of anecdotal evidence; however, these claims of self-medication became so common that the scientific community began to pay attention.

Although initially dismissed, doctors and researchers eventually took notice and looked into CBD for depression. In doing so, they found a variety of other health benefits.

Scientific Research on CBD for Depression

A study conducted at The Utrecht University Center in the Netherlands stands out by endorsing medical marijuana as a reliable cure for depression. Additionally, it improves cognitive performance in the patients affected by Bipolar disorder. Brain scans performed on depression patients typically show that they have a smaller hippocampus.

The hippocampus is the area of the brain in charge of enabling memory formation and cognitive abilities. Research studies have shown a positive result when injecting CBD into a small animal: the hippocampus becomes stimulated, which assists with creating new neurons.

Summary: The results showed that there is a good connection between CBD and the 5-HT1A neuroreceptor. This is the endogenous neurotransmitter serotonin. In other words, cannabidiol increases the hormone of happiness and well-being.

Additionally, the researchers claim that CBD, with its non-psychoactive compounds, has effects comparable with a Tofranil drug. CBD is not a novelty for natural treatment, but it is when speaking in terms of a scientific approach.

Now, scientific circles also claim that CBD is a fast-working antidepressant with a working time of approximately 8 hours. Scientists also add that CBD enhances both serotonergic and cortical signaling through a 5-HT1A receptor-dependent mechanism. There are virtually no CBD’s side effects. Still, it is recommended to consult a medical doctor when taking CBD in parallel to regular pharmaceutical medication due to the side effects of these pharmaceuticals.

Do you want to take preventive action? Use CBD to prevent depression, studies say. It keeps your mental health in proper balance. You could avoid depression by treating stress with the best CBD vape oil for anxiety.

Medical Institutions still don’t have all the answers about how depression exactly occurs. Furthermore, it has been in focus for a while, which means it will take some time to get more proactive solutions, including CBD inclusiveness to depression treatment. Based on many clinical trials, some doctors now endorse CBD treatment, clarifying that CBD depression treatment has minimal or zero risks for the individual’s psychological condition.

Doctors agree with the anecdotal studies, which show that CBD is an antidepressant that improves and normalizes a dysfunctional endocannabinoid system in our bodies caused by depression. Depression manifests in many nuanced psychological disorders, such as major depression, Dysthymia, bipolar disorder, manic depression, and Seasonal Affective Disorder. The conclusion that we are getting is that CBD has multi-effective properties.

Depression is often a result of anxiety – according to patients and scientific evidence.

CNN correspondent Dr. Sanjay Gupta was one of the most important doctors who was advocating for CBD inclusiveness. In collaboration with clinics, The Journal of Psychopharmacology explains that the significant role of CBD is how it interacts with increased depression, occurring in a way that activates limbic and paralimbic areas in the brain.

The limbic system is known as the Emotion Regulator. One of the eminent doctor-researchers, Samir Haj-Dahmane, from the Buffalo’s Research Institute on Addictions, also claims that CBD depression treatment “could potentially help stabilize moods and ease depression.”

The advocacy for CBD depression treatment originates in anecdotal studies. The best CBD ambassadors are the positive experiences reported by patients. This means that numerous patients worldwide, after CBD use, are experiencing alleviated depression, enhanced mood, and general well-being.

So many people are changing standard pharmaceutical drugs for more natural treatment options, such as CBD oil because CBD has no side effects compared to other optional products. For example, thanks to anecdotal studies, and people studying CBD and Cannabis in general, we have more information on dosage and which strain or oil to use for the various manifestations of depression.

Not only do I have personal experience with CBD helping me out of a vast depression, but it also gave me energy. So, with personal interest, I looked for the best CBD oil for energy.

CBD hemp oil can alleviate depression, but the method of CBD intake and daily dosage are essential when it comes to efficiency. When using CBD, it is also crucial to pay attention to your body signals. In other words, listen to your body.

According to patients’ feedback: For mild depression, start with 25-50 mg per day.  You can gradually increase the dose while monitoring yourself to reach the desired effect for more severe cases of depression. It is not uncommon for patients with severe depression to take more than 100 or even several hundred milligrams of CBD.

There is no such thing as CBD overdose. Use our CBD oil dosage calculator to determine the correct number of drops.

Manufacturers usually explain the CBD oil dosing on the product packaging. Still, since there are many products, it is crucial to navigating through the CBD process according to the severity of depression. Since depression affects eating habits, you can mix your CBD product with your food or use the most common method; drop the CBD oil under their tongue and keep it there for at least one minute.

Also, for better results, use CBD oil at least twice daily. The dosage is vital to maintain balanced homeostasis. However, many people take it three times a day or all at once, just once daily.

In some instances, when CBD is not working (usually very severe depression), adding a little THC can be an option. Along with CBD, Δ⁹-tetrahydrocannabinol is the primary therapeutical cannabinoid.

White label CBD products for spa allow spa shops to sell them under their label.